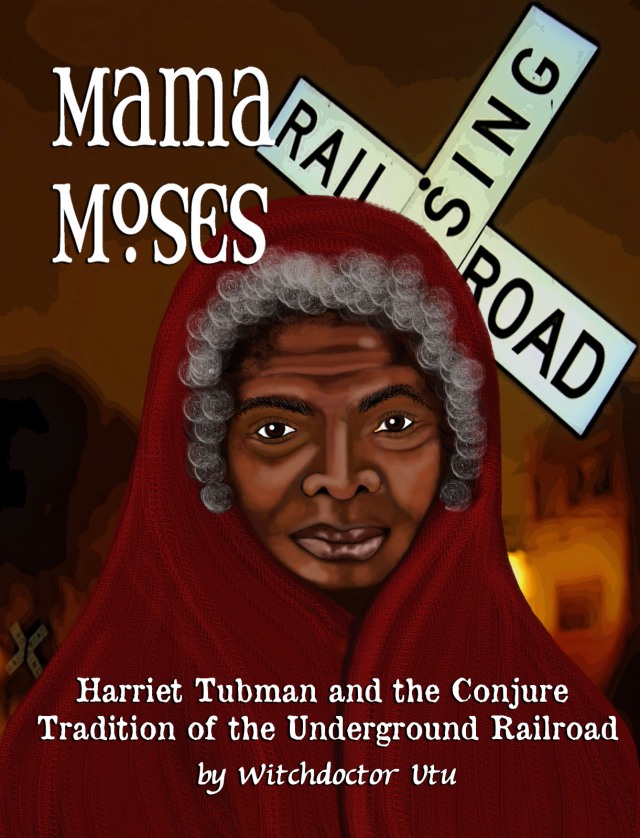 She was born a slave and severely abused by Massa, yet; she never gave up the fight. In fact, she not only refused to give up, she won the fight for freedom, and brought more than 70 slaves to freedom with her.

Tubman  suffered severe head trauma as an adolescent that left her with life long debilitating temporal lobe damage (Larson, 2004). It is said that she refused to help restrain another slave so that he could be beaten because he had left the fields without permission. The other slave ran away and as he did so, his Massa threw a heavy weight at him which missed him and hit Tubman instead, cracking open her skull.  She was left without medical treatment for two days and sent back to work in the fields. For the rest of her life, she suffered from disabling seizures, narcoleptic attacks, and headaches. She also experienced powerful dreams and visions, which she considered to be divine revelations from God.

Harriet Tubman, also known as Mama Moses, is known mostly for her humanitarian and anti slavery efforts.  She escaped slavery in 1849 and went straight to Philadelphia, where she rescued her family. Using the safe houses and antislavery activists that comprised the Underground Railroad, she brought family members and dozens of others, one group at a time in the dark of night, out of the state and into freedom. It is said that Mama Moses never lost a passenger (Lowry, 2008). 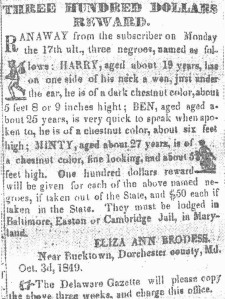 Notice published in the Cambridge Democrat (1849), offering a reward for the return of Harriet Tubman and her two brothers

Large rewards were offered for the return of many of the fugitive slaves, but no one then knew that Mama Moses was the one helping them. When the Southern-dominated Congress passed the Fugitive Slave Law of 1850, requiring law officials in free states to aid efforts to recapture slaves, she helped guide fugitives farther north into Canada, where slavery was prohibited.

Volume 2 of Hoodoo and Conjure Quarterly features an article about Harriet Tubman by new contributor Witchdoctor Utu. Utu is the founder of the Dragon Ritual Drummers, the Niagara Voodoo Shrine, and is a member and drummer for the New Orleans Voodoo Spiritual Temple. Utu has a unique perspective on the conjure tradition as it was brought  to and developed in Canada.

As one who lives and works at the “end of the Railroad”  so to speak here in St. Catharines Ontario Canada, I have a rather unique perspective on the traditions of Hoodoo, Voodoo and the conjuring ways of  the North American tradition. It is here that many of the freedom seeking slaves brought with them, across the U.S. border and into my region in Niagara, via the Underground Railroad,  an entirely distinctive brand of conjure.  Harriet Tubman, the legendary conductor of the clandestine movement that brought  several hundred people to freedom in St. Catharines alone, resided here for many years… While Quakers and Christians of a few sects were supporters and enablers of the cause, the religious and spiritual nature of those that made the journey over the years was as diverse and colorful as the quilts that came to symbolize the movement. Indeed, many of the freedom seekers were renowned root doctors and conjurers, and like Harriet Tubman herself, diviners. Spells of  invisibility, protection, and animal totemic magick  were common and paramount to each and every journey. At the height of the movement, there was a bounty on her head  for $40,000 dead or alive. Harriet began to be known as “The Moses of her people”  later becoming known as “Black Moses” and now more commonly as “Mama Moses”.

One of the unique traditions presented in the article is the reverence for Mama Moses and her followers. According to Utu, when you need to break free of a situation, when you want justice served, when you want to attain more knowledge of the mysteries of the swamps and marsh, or when you simply want to honor a legendary spirit who divined and conjured her way to freedom never to be caught, developing a relationship with Mama Moses is the ticket.

I am  deeply touched by the story of Mama Moses and grateful for this unique conjure tradition that is shared with us by Utu. Details about Mama Moses, building a shrine to her and suggestions for honoring her and her followers are provided in Volume 2 of Hoodoo & Conjure Quarterly, which will be out next month.

Ninety-eight years after the death of Mama Moses, the fight for freedom and equality was still going strong. A court ruling had passed desegregating interstate transportation and hundreds of people fighting for freedom rode through the south on buses to test the new law. Those who rode the buses were called Freedom Riders.

Fifty years ago, the Freedom Riders arrived on buses to New Orleans and were greeted at their destinations by angry, violent mobs. Yesterday, five of the original Freedom Riders stepped off the bus onto the paved streets of the Crescent City. This time, “they were greeted with music and thunderous applause” (Urbaszewski, 2011). My, the times they are a changin’.

Read more about the arrival of five of the original Freedom Riders in New Orleans on May 16th, 2011 at NOLA.com.